The Royal Army of Frogonia

I know this blog has fared poorly in the past couple of years, but you know how it is - you get distracted by other miniatures, getting married, moving house, writing books (you get the picture)!

So here is a little update on the progress of my army for this game - I've finally finished (and completely based, yay!) the bulk of the royalist troops. There is still a cannon with crew and the King's litter to get to on my part, but here are a couple of sample pics of the hammerers and the pike-frogs!

We're going to take some nice pictures of all the infantry with their princess in a proper setting in the next few days, so stay tuned for some more pics!

Not too long ago, Christian converted a Eureka warrior frog in response to Romi's characteristic complaint of "how come there aren't any girl ones?" Eureka loved it and are now casting the frog princess - Princess Romina!

Princess Romina is the beloved daughter of King Ribbidibit, and is in danger of being captured by the evil Captain Pondscum who wants to make her his bride! (Okay, so maybe I just made that last bit up ... no progress on the storyline for the battle for Frogonia just yet)

I'm "Princess Romina", so maybe I'm biased BUT check out the fantastic detail in the conversion sculpting!
(photo courtesy of cdm on Lead Adventure Forum)
Posted by Romi at 3:24 PM 1 comment:

Royalist forces race ahead in battle for army completion!

That's right folks, King Ribbidibit's troops look to snare victory in this first of battles! As rumours surface of an oncoming assault by Captain Pondscum and his crew, another five patriots have enlisted to march against him in an epic battle for Frogonia.

Here are the latest snaps: 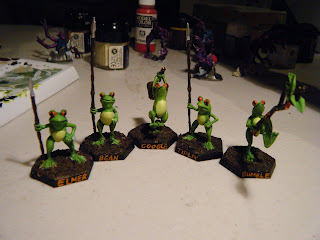 Private Google is good with a hammer: 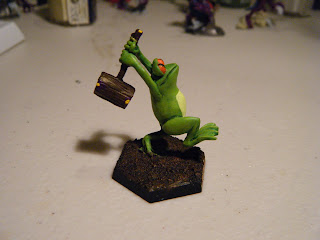 Bumble trundles along with his standard: 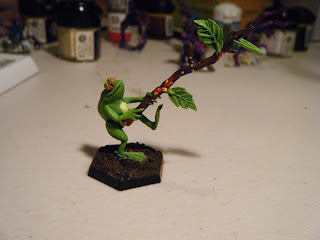 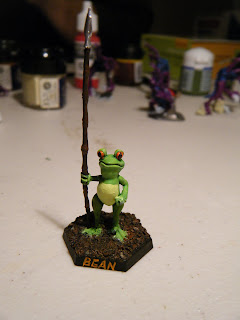 Tidlix, a frog that needs no introduction: 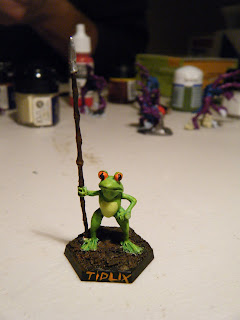 And Elmer, a serious frog: 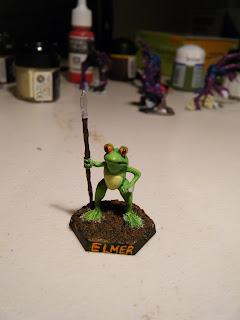 These guys are pretty much done. Just some flocking and what-not missing on the bases - but all in good time, my friends.
What do you think?
Posted by Romi at 10:40 PM 2 comments:

Have finally gotten around to some more painting. Here are the newest additions to King Ribbidibit's army! 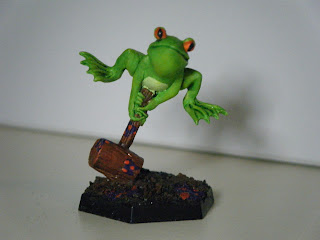 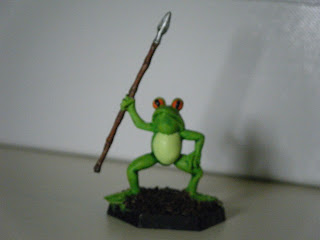 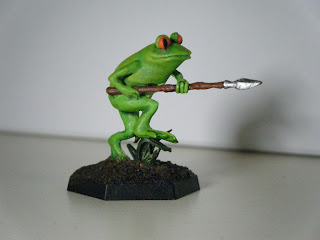 Plenty more still to come! (Hopefully in the not-so-distant future!)
Posted by Romi at 10:56 PM 2 comments:

This weekend saw my froggies acquire some basing! Okay, so maybe not all that much, but it's progress ...

These little guys still have a way to go, but here are some pics to give you an idea of how big King Ribbidibit's forces will be! (not including the 'special' pieces, soon to come): 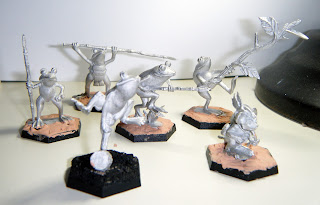 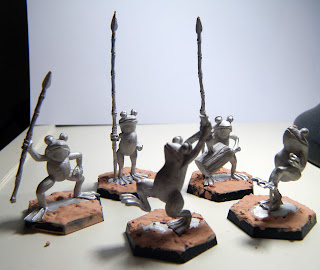 Not the best photos ever, but at least it's an idea of how it's going. I'm notorious for never finishing bases, so stay tuned because I am going to get these done!
Posted by Romi at 10:43 PM 3 comments:

Here are the first followers of the great King Ribbidibit! 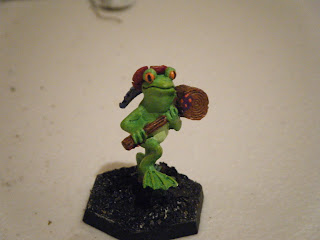 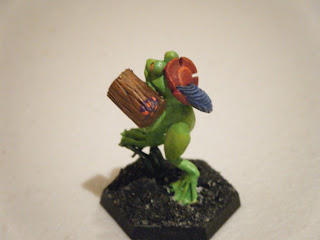 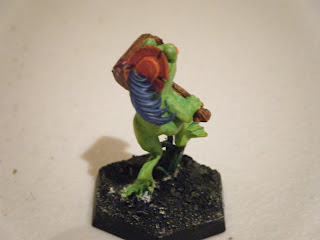 The hat is Red Gore, washed over with Devlan Mud and highlighted with a lighter Blazing Orange. The feather is Mordian Blue with an Asurman Blue wash and light Mordian Blue highliting.

The hammer is Scorched Brown, lightened using Blazing Orange, with Badab Black wash and highlighted with a lighter mix of the same colour. The fungus is Liche Purple with Blazing Orange.

And this is Wick: 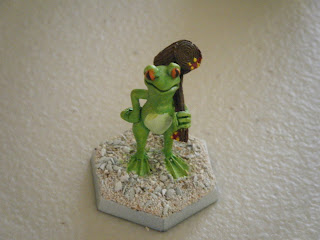 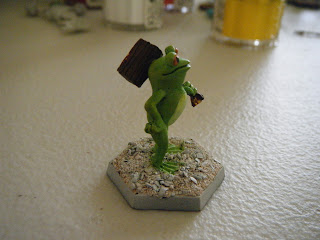 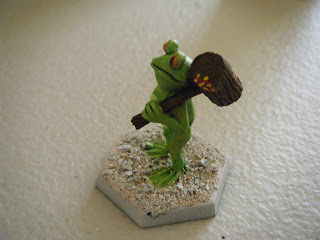 Same colours as Gilbert for the skin and eyes. The hammer is a darker version of Gilbert's with Red Gore and Sunburst Yellow fungus.

I've got plenty more of these little guys to come!
Posted by Romi at 9:40 PM 2 comments: